EnviCrimeNet has actively participated in the Environmental Crime priority of the EU Policy Cycle for organized and serious international crime/EMPACT. This participation is part of Operational Action 4.2 “Jaguar Network” aimed at strengthening the network of LEAs in the EU and Latin America with the holding of intensive work sessions on learning about the European institutions.

The visit was organized by the Spanish Civil Guard (Action Leader), with the invaluable collaboration of the EMPACT 4.2 Driver (OCLAESP, France). The event also had the support of the LIFE+ SATEC Project, co-financed by the European Commission.

EnviCrimeNET was represented by SEPRONA, accompanied by the management coordinator of Life+ SATEC (TRAGSA). Among the strategic activities of LIFE+ SATEC is networking and coordination with networks outside Europe to deal with environmental crimes. 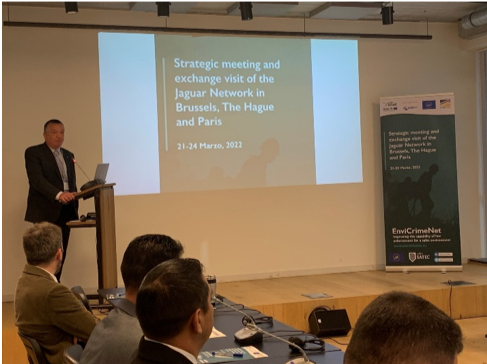 Captain Acosta in the presentation of the LIFE+ SATEC Project (Brussels)

In this context, the objective of LIFE+ SATEC is to bring other networks closer together and set up joint work areas, definition of priorities, policies, protocols or establish exchange of experiences. It is expected that at the next EnviCrimeNet General Assembly to be held in November 2022, agreements can be reached with the Jaguar network.

The visit of the Jaguar network has been an advance for the strengthening of this cooperation and has allowed representatives of European institutions to meet in person. On March 21 and 22, representatives of different directorates-general of the European Commission and EU institutions, presented their priorities and possibilities for cooperation with the Jaguar network on environmental crime: Directorate-General for International Partnerships (DG INTPA), Service for Foreign Policy Instruments (FPI), European External Action Service (EEAS), Directorate-General for Migration and Home Affairs (DG HOME), Directorate-General for Justice and Consumers (DG JUSTICE). On the other hand, the Secretariat of the Council of the European Union presented the actions that the Council of the European Union is promoting in the fight against environmental crimes and promoted the exchange on the strategic and political priorities of Latin American and European countries in terms of criminal prosecution of environmental crime.

The visit to Brussels was completed with a reception at the European Parliament where two Spanish members of the EU Parliament gave presentations, in which they explained the functions and role of Parliament in relation to general legislation and, in particular, environmental legislation.

The visit continued in The Hague, where the delegation visited EUROJUST and EUROPOL. The presentation of EUROPOL was particularly important, due to the strategic and operational agreements it maintains with Brazil and Colombia, this allows the exchange of operational information with EUROPOL and the EU Member States through a secure information exchange system (SIENA).

Both EUROPOL and EUROJUST noted the importance of exchanging operational information to facilitate transnational investigations. The participation of Brazil and Colombia and their privileged relationship with EUROPOL encouraged the rest of the Latin American representatives to try to establish the same type of relationship with said EU law enforcement institution. 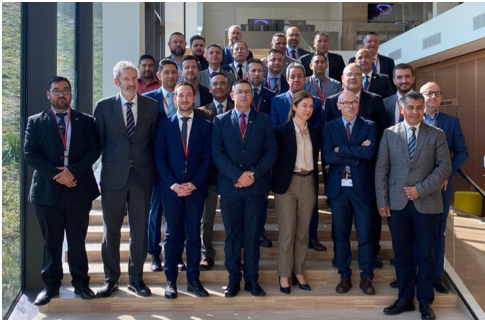 Finally, on March 24, the delegation visited the headquarters of the French Gendarmerie in Paris and the OCLAESP Unit gave a presentation on its structure, functions, responsibilities, division of tasks, etc.

It was very important for the Latin American representatives to receive direct information from OCLAESP about their daily tasks, structure, etc., since it can be used by them as an example of a modern law enforcement system to apply in the fight against environmental criminal networks.

All participants reported their satisfaction with the results of the study visit. In fact, they proposed giving continuity to this group because personal relationships were established that are very useful for increasing synergies and cooperation between Latin American and EU countries. In addition, they learned the functions and roles of the key EU institutions.

This visit has been the prelude to enhance the formal collaboration among EnviCrimeNet and Jaguar Networks. In this context, both Networks will meet in Colombia next July to exchange information on cross-borders researches and operations.

The collaboration among two strategic geographical spaces is a strategic progress in the fight against the environmental crimes and, therefore, in the design of policies in this field.

ENVICRIMENET HOLDS THE 2022 GENERAL ASSEMBLY IN MADRID, UNDER THE PRESIDENCY OF THE GUARDIA CIVIL-SEPRONA, AS PART OF THE LIFE+ SATEC PROJECT OF THE EUROPEAN COMMISSION